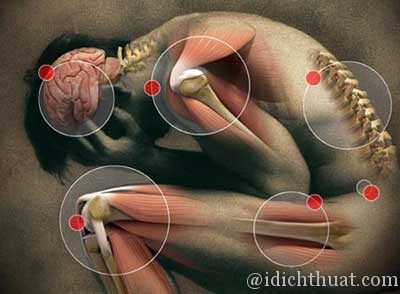 Chronic pain – which may spring from an injury or a progressive disease – is usually viewed as any pain that lasts longer than three months and often goes on for years. While potent drugs are often prescribed, they aren't always the best way to relieve chronic pain. In one survey funded by a pharmaceutical company, 44 percent of people with mild to moderate pain continued to suffer while taking pain, it may dull concentration and disrupt sleep. What's more, long-term use of nonsteroidel anti-inflammatory drugs (NSAIDs), which are sold over-the-counter or prescribed in stronger doses, can cause serious illness.

Today, many leading chronic-pain clinics are encouraging patients to cope with pain using drug-free therapies. Treatments once considered offbeat, such as biofeedback and meditation, are being used at major medical centers across the country, offering new hope to the ten to thirty percent of Americans who suffer pain so it disrupts their lives.

“Modern medicine is a three-legged stool,” says Dr. Herbert Benson, Associate Professor of medicine at Harvard. “Drugs and surgery are two legs. The third is what people can do for themselves.” here's a rundown on some of the most promising drug-free treatments available to day, Biofeedback. Some people react to stress by tightening head and face muscles, which may result in attention headaches; others dilate and constrict blood vessels, which can cause migraines. Biofeedback uses electronic “feedback” (beeps and flashing lights from a machine) to teach patients how to control those physical processes.

Thermal biofeedback tells patients the skin temperature in their hands and is used mostly for migraines. Electromyographic biofeedback alerts patients to muscle strain and works especially well for tension headaches and for jaw, neck and shoulder pain.

Mindfulness meditation, chronic pain sufferers often tell themselves: “this will go on forever; I'm no good for anything anymore.” Such thoughts can actually make their pain worse. Mindfullness meditation helps patients becom aware of their thoughts and the effect of these thoughts on their lives. “Our patients often describe a process call uncoupling, where they realize their thoughts and feelings about pain are different from the pain itself,” says Dr.Saki Santorelli, associate director of the University of Massachusetts Stress Reductuon Clinic.

When andrea Schmitt first went to the University of Pittsburgh's Pain clinic, she was amazed at how many habits she'd acquired that made her pain worse. An occupational therapist teaches her better ways to approach daily activities.

For example, instead of hunching over her computer, she now sits up straight. She rests her feet on a small stool, which takes pressure off her spine.

Embracing this less-driven pace has put Schmitt back in charge of her life. “Now when I feel a painful “attack” coming on, I know how to circumvent it,” she says.

Exercise. People who have chronic pain “tend not to exercise and therefore lose muscle strengthm endurance and flexibility,” says Turk.

Acupuncture. Although it has been used in China to treat pain for thousands of years, acupuncture still makes many Western doctors uncomfortable. Dr, Bruce Pomeranz, a University of Toronto neurophysiologist, has a more plausible explanation: acupuncture may stimulate the release of the body;s own natural painkillers – endorphins – which at something like morphine.

Despite the controversy, acupuncture is increasingly recommended by doctors at leading medical centers – and patients claim relief.

2 Biofeedback = a technique of seeking to control certain emotional states, such as anxiety or depression, by training onself, with the aid of electronic devices, to modify automatic body functions, such as blood pressure or heartbeat: biofeedback

6 dilate = cause sth to become wider, larger or further open

8 migraine = severe recurring type of headache, usu on one side of the head or face, often accompanied by nausea and disturbance of the eyesight: migraine

11 hunch = bend forward into a rounded shape: to bend over (especially with the back and shoulders) into a circle, stooping

12 circumvent = fund a way of overcoming or avoiding sth: find a way to overcome or avoid (something)

14 plausible: (about a statement, apology, etc.) seems to be true or reasonable, believable, trustworthy

16 controversy: a public debate or controversy, often somewhat angry about something that many people disagree with, controversy

REDUCES chronological pain without the use of drugs

Chronic pain can result from an injury or from an ongoing illness – usually referred to as any pain that lasts more than 3 months and often continues for years. Although effective medications are often prescribed by doctors, they are not always the best way to relieve chronic pain. In a study funded by a pharmaceutical company, 44% of patients with chronic, mild to moderate pain, continued to experience pain while taking pain medication.

Even when the drug relieves the pain, it reduces the ability to concentrate and makes the patient restless. Furthermore, long-term use of non-steroidal anti-inflammatory drugs (NSAIDs for short), which are widely available over the counter or prescribed by doctors in stronger forms, can cause serious illness.

Today, many leading hospitals for chronic pain are encouraging patients to cope with pain with non-pharmacological treatments. Once-conventional therapies, such as biofeedback and meditation, are being used in major medical centers across the United States, providing new hope for the word. thirteen to thirty percent of Mycs suffer from debilitating pain that disrupts their lives.

Dr Herbert Benson, Associate Professor of Medicine at Harvard University, said: “Modern medicine is a stool with three legs, drugs and surgery are two legs of that chair and a third leg. of it is what man can do for himself.”

The following is a brief breakdown of some of the most promising and currently available non-drug therapies.

Biofeedback: some people respond to stress by tightening the muscles of the head and face, this response can lead to tension headaches, others can cause symptoms. migraine headache. Biofeedback uses electronic “feedback” (beeps and flashes of light from a machine) to teach patients how to control those physical processes.

Temperature biofeedback tells patients the temperature of the skin of their hands and is mostly used for migraine headaches. Biofeedback electrical imaging of muscles informs the patient of muscle tension and is particularly effective for tension headaches and for muscle pain. jaw, neck and shoulders.

Meditation: people with chronic pain often say to themselves, "This urticaria will continue, I'm no longer of any use to anyone." Thoughts like these can actually make their pain worse. Meditation helps patients become aware of their thoughts and the impact these thoughts have on their lives, says Dr. Saki Santorelli, Associate Director of the University of Massachusetts Stress Management Hospital: Our patients often describe a procedure we call “disassembly” and through which they perceive their thoughts and feelings about pain as different from the pain itself.

When Andrea Schmitt first went to the University of Pittsburgh's pain clinic, she was amazed that many of the habits she had had made her pain worse. An occupational therapist teaches her better ways to perform daily activities. For example, instead of hunched over at the computer desk, she now sits up straight. She put her feet on a small stool, which took the pressure off her spine.

Accepting this de-stressing pace brought Ms. Schmitt back into control. She said: “Now every time I feel the pain coming on

Cong, I know how to avoid it.”

Acupuncture: Although it has been used in China for thousands of years to treat pain, acupuncture still confuses many Western doctors. Dr. Bruce Pomeranz, a neurophysicologist at the University of Toronto, has a more plausible explanation: acupuncture can stimulate the release of the body's own natural pain relievers - called endorphins. These substances act similarly to molds.

Despite the controversy, acupuncture is increasingly being recommended by doctors at leading medical centers, and patients claim to feel relief from their ailments.