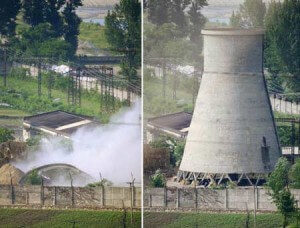 GENEVA – north Korea for the first time reported progress Wednesday in talks started almost three weeks ago with the United States in Geneva about its suspect nuclear program.

“we have make a little progress,” a spokesman for the North Korean delegation told AFP, while refusing to elaborate on which aspect of the were concerned.
Top US relative Robert Gallucci for his part said: “whether we have made progress or not, we will see tomorrow”.

Both delegations have agreed in principle to meet again Thursday, but the time of the meeting has not yet been set, both delagations reported.

Over the past few year days, South Korean Presidenrt Kim Young Sam has multiplied public expressions of express deep concern at what Seoul sees as a softening of Washington's position in the talks.

The pattern of the talks was for the first time broken Wednesday when both delegations which had agreed on an expert-level meeting, decided to communicate by phone and by written messages.
“it started early in the morning and it went on until late last night”, the North Korean spokesman said.

Both countries have been trying to complete a framework agreement concluded on August 12 in Geneva, which would ensure that Pyongyang would forego any attempt to acquire nuclear military capability, as it has been suspected of doing by the United States.

In exchange for North Korea's switch to a safer nuclear technology, Washington would agree to normalize its relations with pyongyang.

GENEVA - North Korea announced on Wednesday for the first time progress in talks with the United States three weeks ago in Geneva about its "suspicious nuclear program".

A spokesman for the North Korean delegation told AFP: "we have made some progress", but declined to give details on the relevant issues of the talks.

For his part, the head of the US high-level negotiator, Robert Galluci, declared: "Whether we make progress or not, we will meet tomorrow."

Both delegations agreed in principle to meet again on Thursday, but both sides also said a date for the meeting had not been set.

Over the past few days, South Korean President Kim Yong Sam has made public statements about his deep concerns about what Seoul views about Washington's place in the talks,

The format of the talks was changed for the first time on Wednesday, when both delegations agreed to a working-level meeting, deciding to communicate by telephone and by written telegram to exchange.
"The meeting started early in the morning and lasted until the next night," a South Korean spokesman said.

Both countries are trying to finalize an agreement not signed on 12/8/94 in Geneva, which guarantees that Pyongyang will renounce any attempt to achieve a nuclear military capability. , as the United States suspected North Korea was carrying out the attempt. In exchange for forcing North Korea to switch to a safer nuclear technology, Washington would agree to normalize relations with Pyongyang.

+ The fastest ways to lose belly fat at home