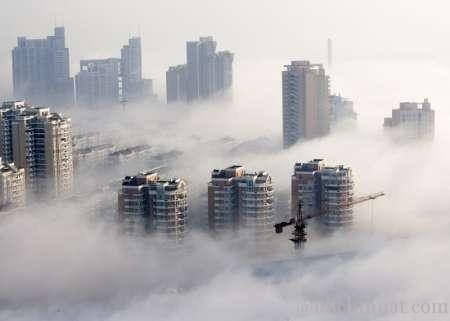 Singapore's air on Monday morning was its healthiest since a haze settled over the island state two months ago, a government spokesman said.

But the Environment Ministry official said it was too soon to pronounce the lingering haze, which has also covered parts of Malaysia and indonesia, officially dispersed.

The Pollutants Standard Index (PSI) at 7a.m on Monday measured 40, considered in the “good” range.
The PSI records the air-quality average of the preceding 24 hours “this so far is the best since the haze started on August 20” the spokesman said. The index hit a record high of 142, in the “unhelthful” range, on September 27.

Forest and coal-steam fires on the Indonesian island of Sumatra and in Kalimantan, the Indonesia part of Borneo have been blamed for the haze.

This weekend was one just two prolonged periods of blue skies for Singapores in the past two months.
“The rainy season in Sumatra and Kalimantan is expected to start in mid-Octover,” the spokesman said. “this will help reduce the fires and therefore the smoke intensity in Singapore.”

He said it was too soon to tell if the haze was subsiding for good.

“Winds over Singapore are expected to be light and variable in direction as we enter the monsoon period this month”, he said “we can expect haze conditions to vary, thinning on some days and returning on others.”
Singapore officials met their Indonesia counterparts in Jakarta over the weekend to discuss the haze. The smoke has disrupted air traffic in the region, and prompts government warnings to those wirg breathing problems to stay indoors. It has also forced restrictions on outdoor activities at schools.

The main cause of the fires was the cleaning of woodlands, the Ministry of Environment said on Saturday.
Indonesia has long-term plans to mine the coal seams in Kalimanta, which are sometions ignited during dry seasons, “which will resolve this source of the problem, the ministry said.

Singapore will provide indonesia with information from weather satellites on the location of forest fires, the ministry said:” such information will be useful in early detection of fires and on deployment of resources to fight fore and prevent their spread.

SINGAPORE'S MOS PROBLEM IS GOOD BUT MAY LOOK OUT

A government spokesman said the sky in Singapore on Monday morning became the clearest since mist hit the island two months ago.

But the environment ministry official said it was too early to say that the lingering smog that covered parts of Malaysia and Indonesia had really cleared.

At 7am on Monday, the PSI pollution index measured was 2, which is considered "good".
PSI recorded the average of the atmosphere quality 24 hours ago. "This is by far the best level since the fog started on August 20," the spokesman said. The index reached a record high – 8, at “bad” on September 142.

Forest fires and coal bed fires in the Indonesian island of Sumatra, in Kalimantan and the Indonesian landmass in Borneo are considered to be the cause of the smog.

These weekends are literally one of two stretches of blue skies for Singaporeans in the past two months.

The spokesman said that the rainy season in Sumatra and Kalimantan is expected to start in mid-October. This will help reduce fires and thus reduce smoke in Singapore.

It is too early to say whether the fog will clear completely or not.

He said: “The wind blowing through Singapore is expected to be mild and change direction as this month we are entering the monsoon period. We can expect the smog situation to change, thinning in a few days and returning on other days.”

Singapore officials met with their Indonesian industry representatives in Jakarta over the weekend to discuss the smog issue.

The smoke interferes with flights in the region and this prompted the government to advise those with difficulty breathing to stay indoors. Outdoor activities in schools must also be limited

On Saturday, the environment ministry determined that the main cause of the fires was forest clearing.
The Environment Ministry said that Indonesia has a long-term plan to dig coal seams that occasionally burn in the dry season in Kalimantan, "this plan will solve the root of the problem".

According to the environment ministry, “singapore will provide Indonesia with information received from weather satellites about the location of forest fires. This source of information will be useful in the early detection of fires and in the implementation of options to combat and prevent the spread of fires.”