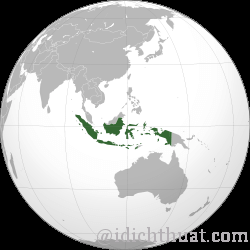 Officials and experts from 11 countries would be attending the session which begins on Wednesday, including the Spartaly Islands' six claimants – Brunei, China, Malaysia, the Philippines, Vietnam and Taiwan.

Indonesia's alatas was quoted be the official Antara news agency on Saturday as saying the workshop aimed to contribute to the quest for peace and cooperation rather than to seek a solution to the Sparatlys' dispute.
Orther attending the meeting would be from Cambodia, Laos, Singapore, Thailand and Indonesia.

The Association of Southeast Asian Nations (ASEAN) groups three of claimants – Brunei, Malaysia and the Philippines – with Indonesia, Singapore and thailand.

The “efforts” to overcome Potential Conflicr in the South China Sea” workshop is the fifth to the hosted by Indonesia, chairman of the 111 – member Non – Aligned Movement, since 1990.

Indonesia hosted a conference on the Spratly Islands dispute

Jakarta, Indonesia's foreign minister, Ali Alatas, said that Indonesia will hold a conference to find solutions to avoid armed conflicts in the South China Sea, where a dispute is taking place. grab the islands with a lot of potential for oil and gas that have been claimed by 6 countries as their territorial waters

Officials and experts from 11 countries will attend the meeting starting on Wednesday, including the six claimants to the Spratlys: Brunei, China, Malaysia, the Philippines, Vietnam and Taiwan.

On Saturday, the antara news agency quoted the Indonesian foreign minister as saying that the conference was aimed at finding peace and cooperation rather than finding a resolution to the dispute over the Spratly Islands.

Other participants in the meeting will be Cambodia, Laos, Singapore, Thailand and Indonesia.
The Association of Southeast Asian Nations has three countries in the group of claimants: Brunei, Malaysia and the Philippines, along with Indonesia, Singapore and Thailand.

The seminar on “efforts to overcome resource disputes in the South China Sea” is the fifth conference organized by Indonesia, the chair of the 5-member non-aligned movement since 111