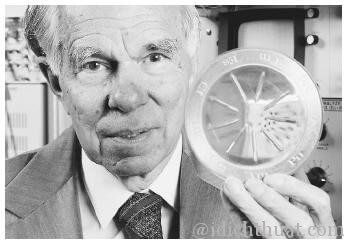 Glenn Theodore Seaborg, the Nobel Prize-winning nuclear chemist who discovered nine atomic alements – including one, plutonium, that altered human understanding of the potential of war – died on February 25, 1999 at his East Bay home. Seaborg was 86 and had been concalescing since a stroke last summer.

Seaborg was born on April 19, 1912, is Ishpeming, a small mining town in northern Michigan. He said he had been so shy as a boy that his mother arranged with his teachers to allow him trips to the bathroom without asking because he was too bashful to raise his hand.

In 1992, the Seaborgs – his father, mother, and sister – moved to Southern California in search of opportunity. He attended high school in Watte, and, in his junior year, chemistry took frim an anthusuastic teacher. “I just thought, my god, why didn't anybody tell me this?”, Seaborg said once, just like magic.

After earning his chemistry degree from UCLA in 1934, he transferred to UC-Berkeley, earning his doctorate in 1937. “The whole atmosphere at Berkeley was just like magic to me”, he once told a reporter. By 1939, he was appointed an instructor in the College of chemistry, but teaching did not stop his research.

Then, in 1941, leading a team that include Edwin McMillan, Joseph Kennedy and Arthur Wahl, he used a 60-inch cyclotron built by Lawrence to bombard a sample of uranium with deuterons, transmuting it into plutonium (atomic number 94), before the experiment, chemists believed that uranium (number 92) was the heaviest element.

By tradition, the symbol for plutonium should have been PL. But, Seaborg instead named it Pu – the sound a child makes when he holds his nose against a bad odor, he once said. “we were just having a little fun.”
The discovery led to the development of the atomic bomb, and Seaborg was one of a constellation of bright scientistd – Szilard, Robert Oppenheimer, Lawrence, Bohr, Fermi, Von Neumann and Feynman among them – made famous by the Manhattan Project.

Seanorg is also known for rearranging the periodic table, the chart of chemical elements devised by the Russian chemist Dmitri Mendeleyev in the 19th century. Seaburg saw that uranium had been misplaced in Mendeleyey's table, leading chemnists to position the new elements improperly as well. Seaborg's revised table is now the standard one found on chemistry lab walls everywhere.

“it's tool a lot of guts to buck Mendeleyev”, Seaborg once said.

In 1951, he was awarded the Nobel Prize in chemistry (which he shared with McMillan) and became something of a Swedish fork hero when he responded to the king's Nobel toast in the distinctive Swedish dialect of his mother's region.

In 1994, he received an even more unique honor when element 106 was officially named Seaborgium. In recent years, he proudly wore a blue “SG” lapel pin.

Seaborg had his troke while being proud in Boston last August. He has been bedridden since.

Bombard= direct high energy parlicles or radiations against: to shoot high-energy elementary particles or radioactive rays at something.

Constellation = a group of associated persons, ideas : a group of people, a group of ideas
gut = courage: courage

The Genius of Atomic Chemistry DO TRAN

Glenn Theodore Seaburg, the Nobel Prize-winning nuclear chemist who discovered nine elements - one of which was plutonium that drastically changed humanity's perception of the potential for war - passed away today. February 9, 25 at his home in East Bay, California. Mr. Seaborg is 2 years old, and has been recuperating since a stroke struck him last summer.

Mr. Seaborg was born on April 19, 4 in Ishpeming. A small town in the northern Michigan mines. He said that as a child, he was so shy that his mother had to negotiate with his teachers to let him go to the bathroom without consulting because the tube was too timid to ask for permission. permission.

In 1922, the Seaborg family – including his father, mother, and sister – moved to southern California in search of a career opportunity. He attended high school at Watte, and in his first year, studied chemistry with an enthusiastic teacher. Seaborg once said: “I had only one thought, Lord, why didn't anyone teach me this before? Disability is a miracle!”.

Then, in 1941, leading a team of Edwin McMillan, Joseph Kennedy and Arthur Wahl, he used a 6-inch accelerator built by Lawrence to shoot dowteron at a sample of uranium, transforming it. into plutonium (atomic number 94). Prior to this experiment, chemists believed that uranium (atomic number 92) was the heaviest element.

Traditionally, the symbol for plutonium should have been PI. But Mr. Seaburg gave it the abbreviation Pu - the sound a child makes when he covers his nose to keep from inhaling an unpleasant odor. He once said, “We were just having a little fun.”

This discovery led to the creation of the atomic bomb, and Seaburg was part of a group of eminent scientists – among them Szilard, Robert Oppenheimer, Lawrence, Bohr, Fermi, Von Neumann and Feynman honored by the Manhattan Project.

Mr. Seaborg once confessed, "it takes a lot of courage to refute Mendeleyev".

In 1951, he was awarded the Nobel Prize in Chemistry (shared with Mr McMillan) and he has become something of a Swedish national hero in response to the King's congratulations to the recipients. Nobel in his mother's native Swedish dialect.

In 1994, he received an even more special honor when element 106 was officially named Seaborgium. In recent years he has proudly carried a blue clip engraved with the word “SG”.

Mr. Seaburg suffered a stroke while he was being honored in Boston last August. He has been bedridden ever since.