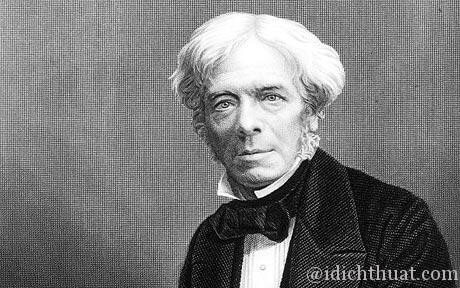 No one ever thought Michael Faraday would change the world, least of all his own family.
His development of the principles of the generator and electric motor provided a way to make electrical energy by mechanical rather than chemical action. Modern civilization, based heavily upon electricity, owes more to Faraday than to any one else, scientists say.

But such a feat looked unlikely early in his life. Born in the Newing ton Butts section of London, Faraday was one of 10 children in a poor, uneducated family.

Faraday (1791-1867) attended day school for several years where he learned basic reading, writing and arithmetic. He knew nearly nothing about advanced mathematics.
When the penniless Faraday turned 14 in 1805, he found a needed jop as apprentice to London bookbinder George Riebau.

During the next seven years with Riebau, Faraday took advantage of his environment by reading books on science and chemistry. Among Faraday's favorites were Jane Marcet's “Conversations in Chemistry” and the scientific entries in the Encyclopedia Britannica.

When Faraday didn't understand something in the books, he queried Riebau and his well-to-do clients.

When no one could answer his questions, he conducted experiments. He scoured books to learn how to build equipment to carry out these experiments. While with Riebau, he built his own electrostatic machine.

His hard work and inquisitive attitude paid off. In 1812, Faraday received tickets from one of Riebau's customers. Royal Philharmonic Society co-founder William Dance, to hear four lectures by Humphrey Davy at the Royal instruction.

Davy was a famous chemist and teacher who directed the Royal Institution's lab. Faraday attened every lecture and took detailed notes, according to Frank James, a Faraday expert at the Royal Institution in London.
Although Faraday had no reason to expect Davy to see him, he called on Davy at the Royal Institution later in 1812 and president the notes he had made. In that meeting, he asked for a position in the science department. Davy said he had no job available, but he interviewed Faraday anyway.

Davy was impressed enough that, when a job as his chemical assistant opened in 1813, he gave it to Faraday. Faraday worked hard conducting experiments for Davy and for himself.

After many failed experiments, Faraday in September 1821 demonstrates electro-magnetic rotation. Working alone he found that the flow of electric current caused a magnet to revolve around a wire carrying current.

These movements continued as long as the current continued to flow.
Here was the principle of the electric motor.
Faraday died in 1867 and was buried in High gate Cemetery in England.

least of all = to an insignificant degree: to an insignificant degree
feat = successful completion of sth needing skill, strength or courage: the successful completion of something that requires ingenuity, strength or courage, feat.
arithmetic = branch of mathematics that deals with calculations using mumbers
well-to-do = properous, wealthy: prosperous, wealthy
conduct = direct, control, manage: direct (something), control, manage
scour = go over (an area) thoroughly searching for (sb/sth) : to go all over (an area) to search (who/what)
inquisitive – (too) fond of inquiring into other people's affairs
pay-off = bring good results, be successful, work: bring good results, successful, effective
rotation = rotating or being rotated

No one thought Michael Faraday would change the world, much less his family.

His invention of the principles of generators and electric motors provided a way of generating electrical energy by mechanical action rather than by chemical action. Modern civilization, largely dependent on electricity, is more indebted to Faraday than anyone else, scientists say.

But such a feat does not appear to have occurred early in his life. Born in Newington Butts of London, Faraday was one of ten children from a poor and uneducated family.

Faraday was born in 1791 and died in 1867, he attended a day school for a few years, where he studied basic subjects: reading, writing and arithmetic. He knew almost nothing about advanced math.

When poor and penniless Faraday turned 14 years old in 1805, he found a job he needed to do as an apprentice to Mr. George Riebau, a London bookbinder.

During the seven years he lived with Mr. Riebau, Mr. Faraday took advantage of his work environment by reading books on science and chemistry. Among Faraday's favorite works are Jane Marcet's "Conversations in Chemistry" and the science entries in the Encyclopedia Britannica.

When Mr. Faraday did not understand something in the book, he asked Mr. Riebau and his wealthy clients.
When no one answered his questions, he experimented. He scoured the books to learn how to build a device to carry out this experiment. While working with Mr. Riebau, he built his own electrostatic machine.

His hard work and passion for inquiry paid off. In 1812, Faraday received an invitation from one of Mr. Riebau's clients, William Dance, the co-founder of the Royal Grand Orchestra, to listen to four lectures by Mr. Humphry Davy at the Royal Institution. According to Frank James, a Faraday expert at the Royal Institution in London, Faraday attended every lecture and took detailed notes.

Although Faraday had no reason to expect Mr. Davy to see him, later, in 1812, Faraday visited Mr. Davy at the royal institute and showed Mr. Davy what Faraday had recorded. During that meeting, he applied for a job in the science department. Mr. Davy said he didn't have a job available, but he interviewed Faraday anyway.

Mr. Davy had made such a good impression of Mr. Faraday that in 1813 when he needed someone to serve as an assistant, he reserved the position for Faraday. Faraday worked hard to perform experiments for Mr. Davy and for himself.

Around 1820, Hans Christian Oested, a Danish physicist, discovered a connection between magnetic fields and electricity. Mr. Davy and Mr. Faraday became interested in this invention.

After many failed experiments, in September 1821 Mr. Faraday demonstrated electromagnetic rotation. While working alone, he discovered that electric current caused a magnet to rotate around a wire through which current was flowing. These motions continue as long as the current is still flowing through the wire.

This is the principle of the electric motor.
Faraday died in 1876 and was interred in Highgate Cemetery in England.