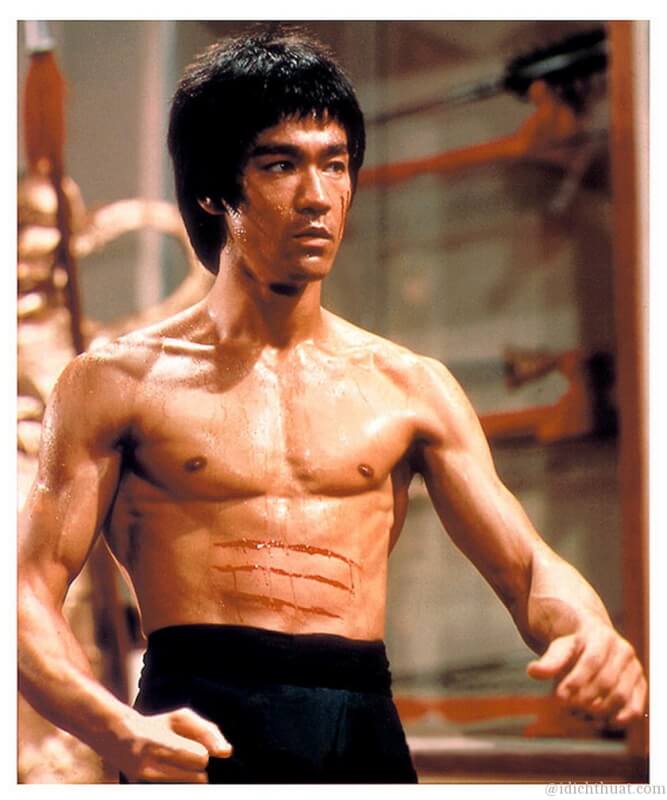 Bruce Lee flashed brilliantly like a meteor through the world of martial arts and motion pictures, Then, on July 20 1973, in Hong Kong, like a meteor – he disappeared, extinguished by sudden death. He was just 32.

Bruce Lee began his martial arts studies with wing chunk, under the tulelage of the late Yip Man, to alleviate the personal insecurity instilled by Hong Kong city life. Perhaps because his training enveloped him to the point of fanaticism, he was eventually able to refire, distill and mature into a philosopher, technician and innovator of the martial arts.

After intensive study of different martial arts styles and theories, Lee developed a concept of martial arts for the individual man. This concept he later labeled Jeet Kune Do, the way of the intercepting fist, It has antecedents not only in his physical training and voluminous martial arts library (over tow thousand books), but in his formal education as well (a philosophy major at the University of Washington, Seattle).

Lee also combines his martial arts expertise with his knowledge of acting skills and cinematic techniques, starring in several motion pictures: The Big Boss, First of Fury, Way of the Dragon and Enter the Dragon.

Bruce Lee's death plunges both martial arts and film passionate into an abyss of doubt. Out of their growing demand to know more of and about him, his Tao of Jeet Kune Do was published, which is now followed by BRUCE LEE's FIGHTING METHOD.

– Meteor = smakk mass of matter that enters the earth's atmosphere from outer space, making a bright streak across the night sky as it is burnt up : meteor

-Voluminous or = (of writing) great in quantity, abundant

-abyss = a hole so deep that seems to have no bottom

Bruce Lee shines brightly like a shooting star in the world of martial arts and cinema. Then, on July 20, 7, in Hong Kong, it was like a meteor – he was extinguished by sudden death. He is only 1973 years old.

Bruce began to learn martial arts with nunchaku, taught by the late Yip Man, to alleviate the sense of insecurity that pervades Hong Kong society. Perhaps his hard work made him become obsessed with this martial art to the point of fanaticism, he finally created for himself the ability to refine, refine and mature to become a philosopher, a master..and an innovator of martial arts.

After deeply studying the styles and theories of different martial arts, Bruce developed a personal martial arts concept. This concept was later named as Trieu Quyen Dao – the method of interception with a punch. This martial art derives not only from his physical training and the extensive library of martial arts (more than 2000 books), but also from his formal education ( he studied philosophy at the University of washington, in Seattle.)

Bruce Lee also combines his martial arts expertise with his knowledge of acting skills and cinematic techniques, he has starred in several films: The Big Boss, First of Fury, Way of the Dragon and Enter the Dragon.

Bruce Lee's death has deeply shocked his fans in both martial arts and cinema. Due to increasing demand from fans to know more about him, the book Tao of Jeet Kune Do was published, followed by Bruce Le's Fighting Method book.